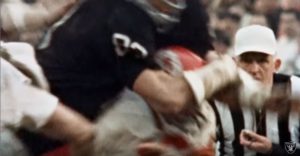 The old Autumn Wind was a pirate like Ben Davidson.

The Oakland Raiders are dead. Long live the Las Vegas Raiders (as long as the public money keeps flowing). The team will retain its name and colors, but Raiders game will never be the same. They need a new tradition, a new home-field advantage – and a new version of The Autumn Wind, Steve Sabol’s tribute to the silver-and-black that he wrote for NFL Films in 1974. You know, something more appropriate to Vegas.

The autumn wind is a gambler,
His wedding ring’s sitting in pawn.
He’ll give you a buck and say it’s for luck,
Then you’ll notice your wallet is gone.

The autumn win is a lounge act,
Designed to insult and annoy.
He’ll make fun of your hat and call your wife fat
As he opens for Siegfried and Roy.

The autumn wind is a mob boss
Holding a Cuban cigar.
He’ll invite you to schmooze and order you booze,
But your friend’s in the trunk of a car.

The autumn wind is a stripper.
She melts you with sighs and moans.
You’ll think you’re a prize as she looks in your eyes,
But she’s just trying to pay off her loans.