In Conversation With Steve Kerr 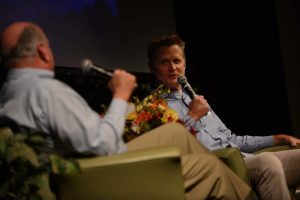 Steve Kerr was the Man of the Hour last night. He appeared with his interviewer, Garry St. Jean, as part of the Sonoma Speaker Series. The event was in the auditorium of Hanna Boys Center, a residential school for at-risk teens outside of Sonoma that does some great work. The two men sat on comfy chairs, framed by potted plants. On the table between them was a bottle of red wine, which St. Jean clearly hogged. There were 345 people in attendance, and the event sold out in 58 minutes.

The two men conversed for about an hour, and then Kerr answered questions from the audience for another half-hour. There weren’t a lot of revelations for veteran Warriors-watchers. In fact, it was sort of a compilation of Steve Kerr’s Greatest Hits.

He talked about Draymond Green’s passion and Stephen Curry’s strong character. He recalled going mostly unrecruited out of high school, and of the joy he wants the Warriors to play with. He repeated stories we’ve heard before, like the time he and Danny Ferry stuck Gregg Popovich with the dinner bill, and how he spliced a clip from a blackjack primer – “never split 10s” – into game tape, using humor to discourage Draymond from passing up future uncontested layups for future contested 3-pointers.

But there were tidbits. There are always tidbits. Here are excerpts:

Kerr on playing for his first NBA coach, Cotton Fitzsimmons: “I was a rookie, I hardly ever played. I was scared to death to make a mistake. So we ran this defensive drill one time where the ball swings, and I didn’t try to get out for a steal because I didn’t want to get beat back-door for a layup. So I just kind of played it safe, and the ball swung, and Cotton, with that gravelly Southern twang, he goes, ‘Hold on!’ And he goes, ‘Kerr, I’ll bet your parents voted for Goldwater.’ I wasn’t sure what he meant. What do you mean? He said, ‘You’re so damn conservative, take a chance once in a while.’”

St. Jean confirmed, when Kerr asked, that Gregg Popovich used to diagram plays on a legal pad with a No. 2 pencil in his early days as an NBA coach

All that droll video editing? Kerr got the idea from Phil Jackson. For example, one year the Bulls had three viable centers in Luc Longley, Will Perdue and Bill Wennington. Jackson showed a clip in which a TV announcer said, “And the Bulls are again going with their three-headed monster at center.” Jackson immediately cut to the three-headed knight from “Monty Python and the Holy Grail.”

Organizers showed a well-known video compilation of Kerr offering words of encouragement to Curry, notably telling his brilliant point guard to ignore the shooting numbers during an off game and focus on the plus-minus. Kerr added this kicker: “The part they didn’t pick up, (Curry) goes, ‘I need a song.’ This is what he said to me. Because he was struggling. He goes, I need a song in my head. Just to get out of his own… And I said, ‘Well, all right.’ And does anybody like the band Fun? Anybody like Fun? So there’s this song called ‘Carry On.’ You guys have heard the song ‘Carry On’? I love that song. For whatever reason, I think I had heard it that day. So I go, ‘You know that song ‘Carry On’ by Fun?’ He goes, ‘yeah, yeah.’ I go, ‘Well, sing that when you’re out there.’ And then we started talking about the plus-minus and the shooting totals. And that’s why at the end I said, ‘Carry on, my son.’”

Someone asked Kerr about his health, and this is how the coach replied: “Doing better, thank you for asking. Played golf a few weeks ago for the first time in a while. … It’s funny. If you’re a golfer, you know what I’m talking about. … I was swinging easy to protect my back, and the ball was just like, (whooshing sound). It was like, why don’t I do this all the time?”

One man asked Kerr when he was going to run for political office like Bill Bradley. Kerr: “Very flattering. I’ve been playing and practicing and coaching basketball for 30 years, so I’m not exactly sure how I would just all of a sudden become qualified for something like that. But I appreciate the sentiment. Although the bar has been lowered some. We’re all candidates for the next presidential election.”

At one point a guy asked Kerr which qualities are efficacious in a coaching role as opposed to a GM role. Kerr interrupted him to ask, “What does efficacious mean?” When the man reworded, it turned into a two-part question, the second part being, How do you stay so down to earth? To which Kerr replied: “I think it’s mostly just trying to be as efficacious as possible.”

Kerr followed that one-liner with a story: “When I worked in TV, I worked a game with Charles Barkley. It was Charles and Marv Albert and me, it was a three-man booth, and we were doing a Knicks game. And Marv Albert says, ‘And Charles, the Knicks show flashes of brilliance, but then it seems that a lethargy sets in.’ And Charles goes, ‘Marv, I don’t know what lethargy means, but if it means they suck then I agree with you.’”

Kerr on leadership: “The best leaders I played for were probably Gregg Popovich and Phil Jackson. And they reminded me a lot of my dad, in that they were clearly in charge, they were very funny, had a real sense of humor, I knew they cared about me, I knew they loved me, and I was a tiny bit afraid of them. That’s leadership, I guess.”

Kerr, when asked what he is doing to hang on to key free agents like Kevin Durant: “Paying them a lot of money?”

A boy asked Kerr whom he would add to the Warriors roster if he could choose any player in the game. Kerr mulled it over, then said: “I’m perfectly happy with the group that we have.”

The final question to Kerr was who would pick among Michael Jordan, LeBron James and Kobe Bryant. “Oh, that’s easy,” Kerr said. “Michael.”