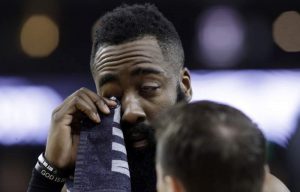 “I did,” the Warriors coach said after a Saturday-morning shootaround at Toyota Center, site of tonight’s Western Conference semifinal Game 3. “I wanted to go to sleep, but I couldn’t. Just like everybody else.”

Well, not everybody. Andre Iguodala said he was “in bed early, getting my sleep. It’s important for our four-OT game, right? Nah, it was exciting basketball, two teams fighting it out. No subs. Just gutting it out.”

They were referencing the Portland Trailblazers’ epic, four-overtime Game 3 win against the Denver Nuggets in the other West semifinal. And while it was just a throwaway line, Iguodala snoozing while the second and third best teams in the conference were fighting until near-collapse was quite a metaphor for these NBA playoffs.

Three of the four semifinal series are shaping up as 15-round heavyweight bouts. And the Warriors’ reaction? Great! Take these suckers to seven games! And play multiple overtimes every night!

The Warriors are motivated to beat the Houston Rockets for obvious reasons. They can’t advance to another NBA championship without this steppingstone. But they have an ulterior motive for trying to wrap up this series early – as in, win here tonight and Monday, and avoid Game 5 in Oakland.

If the Warriors can sweep the Rockets, they might have as long as a week off while the Blazers and Nuggets remain at each other’s throats. That’s a week of rest for the players, and a week of film study (on two potential opponents) for the Golden State coaching staff, while the other West survivors are offered neither advantage.

“No. Those guys are young,” Kerr said. “They’ll get over it quickly.”

True. But the accumulation of playing time over a long series might be a real factor. And the teams in the East, where both semifinal series (and, presumably, the conference finals) are shaping up as tossups, could be a bit fatigued by the time the NBA Finals tip off.

“In my younger days, probably wouldn’t be a problem,” Iguodala reflected on that Nuggets-Blazers marathon. “But that just shows guys keeping minds and bodies right. It’s mentally as fatiguing as physically. So tough game.”

The Warriors have played 91 postseason games (and counting) since Kerr became coach in the fall of 2014. That’s a lot of mental and physical fatigue. A few extra days off could be the tonic this team wants, and one more hurdle for the rest of the NBA.