The secret formula for NBA success 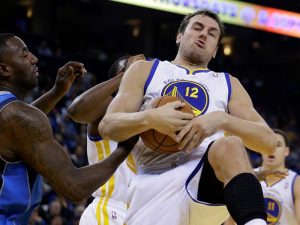 Get yourself an immigrant who loves rebounding as much as Andrew Bogut.
Credit: Associated Press

Hey, NBA general managers. You want to make the Western or Eastern conference finals next year? Spend less time on your salary cap and college scouting reports, and more time on passport stamps and height charts.

The four teams left standing have virtually no shared traits in terms of their pace or offensive sets or defensive approach or pedigree or geography. They do, however, have one thing in common. Each of the four teams playing tonight and tomorrow signed a foreign-born big man midseason.

The Toronto Raptors traded for Marc Gasol (7-1 native of Spain) on Feb. 7, the same day the Milwaukee Bucks traded for Nikola Mirotic (6-10, Montenegro). Less than a week later, the Portland Trail Blazers signed Enes Kanter (6-11, born in Switzerland, grew up in Turkey). And the Warriors, hedging their bets despite being the team favored to win it all, signed Andrew Bogut (7-0, Australia) on March 6.

All of them have been helpful in the playoffs.

Gasol has started every game for the Raptors and has energized them with his post presence. Mirotic has helped the Bucks spread the court, and has contributed 10.2 points per game in the postseason. The Warriors have exposed Kanter to some extent, but he was huge in the Blazers-Nuggets series and is averaging better than 10 rebounds per game through the playoffs. Bogut has seen his minutes disappear lately, but did start six games in place of injured DeMarcus Cousins.

As you can see, it doesn’t really matter where the guy is from, as long as it’s not Fresno or Chattanooga. The height can vary a bit, and style of play can vary more than that. Your import can be a rugged rebounder and screen setter like Bogut, or a fluid outside shooter like Mirotic. The important thing is to find a large man with an accent who is languishing on someone else’s bench, or playing before modest crowds overseas.

And don’t cheat. Milwaukee tried to double down on the strategy by signing Pau Gasol, Marc’s older brother, on March 3. Pau developed a stress fracture in his foot and won’t play a minute in the playoffs.

So now you have the blueprint. If you want to play in the conference finals next year – and unless you’re the Knicks, I know you do – dig up that Argentine 7-footer being underutilized by a lottery team and go after him hard. Or what’s Dikembe Mutombo doing? He’s only 52.